Not a "vacation" destination, but definitely a trip.

Do you ever get the feeling that you are Alice and you have just tumbled down the rabbit hole?

With tentative ideas for a multimedia documentary project swirling in our heads, Taka and I visit Naruko for our first scouting expedition.

What is this place he has told me so much about?

We leave Sendai at about 8:30am and spend 1.5 hours traveling increasingly smaller roads. The journey there is pretty, if unremarkable: a typically Japanese mix of rice fields, suburban homes, and convenience stores. Even as we pull into the town itself, my first thought is... "This is it?"

When I imagined a rustic hot spring resort, I was thinking temple-like wooden inns tucked in shady groves of towering cedar. You know, like this: 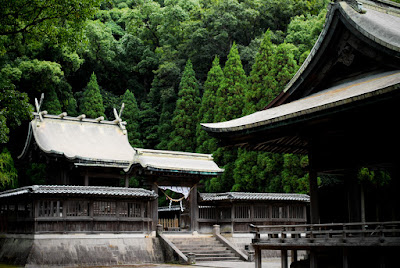 This town looks more like a truck stop in Pennsylvania. 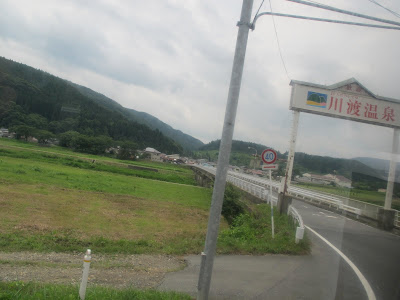 We park in the lot of a restaurant called Big Star. It used to be a typical noodle restaurant with karaoke, complete with an ugly sign on the roof declaring KA-RA-O-KE. The owner's daughter moved back to Naruko from Tokyo about two years ago and took over the place. She decided to take the place upscale, kicking-and-screaming: she had the karaoke sign torn down and introduced organic vegetables.

I thought perhaps we were going to meet her, or at least eat at the restaurant. But no... it's just a convenient place to meet our tour guide for the day: Oba Yoko-san.

At first, I thought she was just a friend of Taka's with some time on her hands and who was kind enough to sorta show us around. Nope. A Tokyo transplant married to a local onsen owner, she has the passion of a true convert and has planned the day to the minute, complete with a typed itinerary. After Oba-san hops in the backseat, Taka maneuvers the car over the icy roads to the top of a small peak so we can see Katanuma Lake. Fed by hot springs, it smells like sulfur and is a brilliant turquoise. We are the only ones there, the lake surrounded by half a metre of untouched snow.

We fix that, as the three of us tramp off looking for a shrine on the far side of the lake (which we fail to find).

Once back in downtown Naruko, we soak our snow-numbed feet in the onsen foot bath just outside the train station. Grand Central, this is not.

We have lunch in a tiny little soba restaurant. Like many dining establishments in Japan, it boasts only four tables. Unlike most restaurants in Japan, or at least in Sendai, everyone seems to know each other. As Naruko only has about 9,000 permanent residents spread between five distinct villages, and few restaurants, I suppose you would have to try mightily not to run into your neighbors. The happy chatter ceases momentarily as the jolt of a minor earthquake hits as we eat, but as soon as the ground stops quivering and we are sure it is not the Big One, we all go back to slurping our noodles in the polite Japanese way.

After a short visit to a shrine dedicated to the God of the Hot Springs (I had no idea there was such a Shinto deity, but it strikes me as being a better gig than being the God of Jellyfish or the God of War), we stop for coffee in a shop run by an elderly couple. The man is a Beatles fanatic: Beatles books line the shelves, an Abbey Road sign hangs proudly on the wall, guitars all over... and although in his late 60s/early 70s, the proprietor sports a Beatles moptop.

Full of soba and caffeine, we drive across the river and up the tallest mountain in the area.

We stop by a junior high school that had been closed due to low enrollment. Just recently, it has been reborn as a cultural center (it is so new, they are still finding staff). No one is around, so we move on.

We end up at the regional government building. The residents refused to have an ugly concrete building, so it is entirely built from local timber. It is gorgeous, all blond wood and full of light. Through sheer chance, the building is hosting a bunkasai (cultural festival).

The festival is split by gender: all of the food-related booths are in the lobby, and all are staffed by women.

One lady, noticeably younger than the rest, is selling rice bread. She is apparently locally famous for rice bread pizza, with organic toppings, that she sells from a truck. Now, before I left America, I was living in Portland, Oregon, home to hippies and food trucks, and to my knowledge, none of them are selling organic rice dough pizza.

We find the men in an inner room. One elderly gentleman is carving kokeshi dolls, two weave mats, and an ANCIENT old man is carving wooden buckets with a hacksaw. I fear for his fingers, but I suppose he has carved a forest's worth of buckets by this point in his life.

The man in charge of the room, who is also carving wooden benches, is Ohnuma Yukio-san. Again, by coincidence, he is the one in charge of the new cultural center at the former junior high school. We have unwittingly solved the mystery of why no one was there when we dropped by. He hands me a glass of sake, which I sip as Taka explains our project. Leaving the bunkasai, we drive deep into the woods to Hell Valley, where the hot springs have not been tapped.


The road is covered by about one metre of snow, so we abandon the car and push our way through the deep drifts. The snow is untouched, we have the valley to ourselves. The springs are truly untamed: gushing cracks in the hillside, geysers, boiling puddles, you name it... With all of the smoke and smell of sulfur, the place really does resemble hell, albeit one that is slightly frozen over. We boil some eggs (which Taka had thoughtfully brought along for just such a purpose) in a puddle.


(I later learn that the water is high in radon, and eggs boiled in the water, often sold as souvenirs in Naruko, never go bad. I don't see this as a selling point: eggs SHOULD go bad! )


The snow starts falling more heavily as we stand on the path, munching our radioactive eggs in the deserted valley.


Back in town, I am introduced to Oba-san's husband, Ohnuma Shinji-san, owner of Ryokan Ohnuma. He tells me about the concepts behind toji culture and of his efforts to revive it. One scheme involves offering a "toji special" - allowing people to stay at his inn for a month for about US$500...

An idea flashes into my head: what better way to explore toji culture than to participate in toji myself?

I make a mental note to discuss the idea with Taka later. I get the opportunity sooner than I expect. Although it is nearly dark, Ohnuma-san drives Taka and me to his famous outdoor bath. The bath is SO famous that if you go to Wikipedia and search "onsen", not only is it a picture of Naruko that comes up, not only is it a picture of Ryokan Ohnuma, but it is the EXACT bath that Taka and I were in!!

As Taka and I soak and chat, I see story after story unfolding... the Beatles coffee shop owner, Oba-san the sake composer, the organic pizza maker, the fellow in charge of the cultural center... and those are people I managed to meet in a single day!

So many stories to tell...