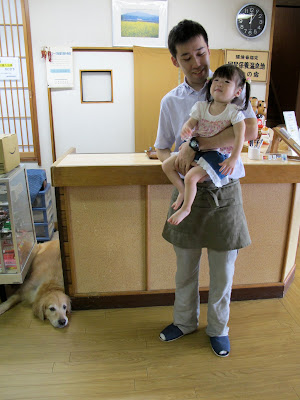 Another subject discovered in the Naruko free paper.
Kawatabi is the middle ground between the large hotels of Naruko and the shabbiness of Higashi-Naruko. The ryokan here are in the 10-room range, but tend to be a little more expensive.
At this in, the young man was living in Tokyo, working for a large electronics manufacturer. After getting married, his wife (although not from Naruko) suggested they take over the family business. So, while his parents are still alive, he has taken control of the family business while still in his 20s.
Importing ideas from the big city, the ryokan not only has a website, but he is also a Twitter user. He has
installed a computer in the lobby, and on the day we were visiting, he had received hubs to wire the until property for wi-fi.
He tends to get younger guests, who have heard about the place online.
The rooms are in fantastic shape. His mother, a wise manager, designs all the rooms. Rather than wait for the whole place to get shabby and to renovate all at once, they try to overhaul two rooms every year, so the cost is spread out.
They have two very large rooms on the ground floor, which used to be toji rooms. But they get so few toji customers there days, they tore out the kitchens and added a sitting room.
They have two distinct sources for their hot springs, so they rotate daily which bath is for men and which one is for women.
August 16, 2010
Posted by Photoji Project at 8:00 AM