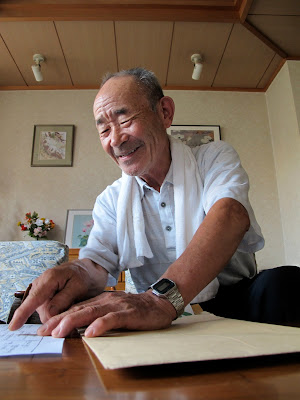 This morning, we ran into Kan-chan who works at Kanshichiyu. He is 76 years old and has been working there for 60 years! We discovered, much to our surprise, that he is now “retired”, shocking since he has been there every single time we have visited. He has been working there since he was 16. He jokes that he had no choice in the matter, as his parents named him “Kan” specifically so he would get a job at Kanshichiyu! As a side note, the honorific ~chan usually applies to children younger than school age. It is considered very affectionate, and I have never heard the term used with an elderly man before.
He is exceedingly proud of the Kanshichiyu’s reputation as a place of fertility. Many couples who have had trouble conceiving have gone there and have had success in getting pregnant. He used to “teach” young couples how to get pregnant, and we were all taken aback, picturing Kan-chan explaining the bird and the bees to horrified young newlyweds. In fact, he was talking about how, if you soak in the onsen, it raises your internal body temperature to the optimal conditions for conception (in Japan, there is a sort of fuzzy understanding of humans as being mammals with internally regulated temperatures… they often talk of bodies being too cold, as if people are part reptile). Apparently, even one of the decendents of the Date clan managed to conceive twins there after many failures elsewhere. (I have a sneaking suspicion that perhaps being cramped in a small Japanese household with many generations, then going on a vacation and having some time alone may play a part in the “magic”). But, we’ll let him think it is the heat of the onsen.
On his days off, he goes to the fields, the mountains, or the river. We stumbled upon the fact that he was no longer employed when we offered to accompany him and asked when he was off work. “Off work?” he asked, confused, “I’m retired!”
** In the following weeks, we ran into Kan-chan a number of times. Once, he showed us the baths buried in the floor, used decades ago before the present baths were built. He told us that the baths were mixed gender well into the 1960s and that the men would have to walk past the ladies area to get to their bath. Eventually, western morality took over, and he baths were gender-segregated. I still have a feeling that is why the baths were so popular with the hippies during the Leisure Boom in the mid-60s…
Kan-chan has been working there so long, he can check the temperature of the water with his hand, no need for a thermometer.
He loves riddles and wordplay, and happily showed us pages of complicated songs and poems, all with layers of meaning.
Kan-chan has a coin collection. The fishermen, who would come to the ryokan for toji, would bring money they had earned in ports all around the world. They would give them to Kan-chan. So, even though he has never lived beyond the borders of Naruko, he has a coin collection spanning the globe. At one point, he took some of his loot to 77 Bank, to try and get some money. At first, they thought it was fake, and then they refused to convert it, since so much of it was so old it was long out-of-circulation. That being said, it never occurred to him to “convert it” to cash by selling it to a money collector.
August 15, 2010
Posted by Photoji Project at 8:40 AM