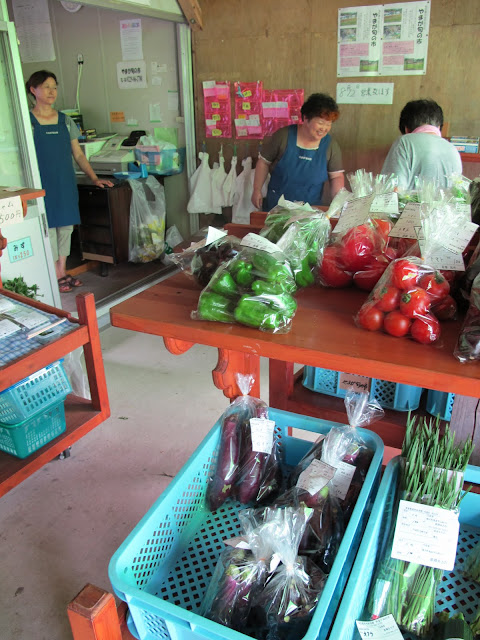 After chatting with Gotou-san, as he drove us back down the mountain, we stopped at a vegetable stand. As one of his many duties and projects, in addition to being a government official, a rice farmer, a traditional dancer, and a talented amateur singer, Gotou-san also helped found this vegetable stand, as it was his idea. Started 12 years ago, it is staffed entirely by women, 16 of them, who run it cooperatively. They raise their own vegetables or make their own crafts, bring them to the stand, and all sell them together, taking turns who staffs the shop. Their youngest member is actually a Korean woman, the wife of a local farmer, and she is 38. The oldest are in their 80s.
They were very happy to point out that business has increased every year, with the exception of this one. It has been an especially hot summer, which has both affected the crops and also the amount of traffic. They have about 30 visitors a day. They sell from late-May until November. The rest of the year is too snowy, so snowy in fact, that a curtain isn’t enough to keep the snow out. They build a wooden cocoon to protect the stand through the winter, like a suit of armor, and they dismantle it in the spring.
They sell a wide array of fruits and vegetables. They take pride in the foods being very fresh, locally sourced, and reasonably priced (as there is no middle man). The two women working that afternoon were kind enough to serve us an impromptu lunch, which was delicious. It was heartening to see a project which, although only a microenterprise, was able to report increasing business and to see a successful project in Onikoube.