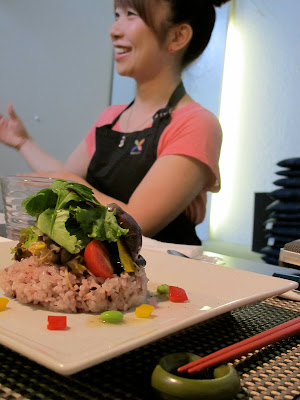 Lunch at Big Star. The restaurant has been in operation for 17 years. It started as a karaoke box, with just a few food items. There was a huge sign on the roof back then, KA-RA-O-KE, which was an eyesore. Especially when the “ra” fell off, leaving a sign that looked like the word for “coffin”.  They took the sign down, put up a new fence, then 3-4 years ago was reborn. Half is still karaoke boxes, but the other half is now a fine-dining bistro, all white walls, pendulum lighting, white plates, like a bistro in Tokyo or NYC. The reason for the change is the owner’s daughter, Osawa Eriko-san.  She was born and raised in Naruko, left for Tokyo for university and lived there for about 8 years. She did not pursue a culinary degree, she studied fashion design. But during her years in Tokyo, she found herself increasingly interested in food, and the more she visited restaurants, the more she realized that the food she ate in Naruko was far superior to anything she ate in the big city. Fresher, more flavorful…

So, she returned to Sendai, where she tried to be a baker, worked at a famous sweets shop for one year, but then discovered program to get a certificate as a vegetable somalier. She obtained the certificate, then returned to her mother’s restaurant, overhauling the menu, making fine vegetable based dishes.
Until recently, only locals were coming to the restaurant, especially for dinner. In the last year, as the restaurant has ended up in national media, they are getting increasing guests from all around Japan, especially for lunch (dinner is still mostly locals).
The food was a stacked greens salad, a sweet corn soup, (nothing added), and the main dish, which was ancient rice with spouts, greens, vegetables. Desert was a chilled gelatin dessert with fresh fruits.
When Osawa-san first returned, she began to cook with more local vegetables, and of course began to use the onsen again. After a long history of skin problems, after 3 weeks of fresh vegetables and onsen, her skin problems cleared up.
She has discussed joint programs with the ryokans, but nothing has happened. Big Star dinner as part of the onsen tour was the first joint program offered by Big Star in conjunction with a ryokan.
She is currently 31 years old, when she was growing up, she thought it was a boring country place. But after living in Tokyo and returning, she is really glad to be back, which was a sentiment echoed by a few people who left and came back.
It would be interesting to hear something from someone who grew up in a big city and then moved to Naruko, if they would feel the same.
She said her favorite place was the lone tree in the rice field on the Way of the Wind, which many people agree as their favorite place. It is one place that has not changed within anyone’s memory.
August 10, 2010
Posted by Photoji Project at 1:40 PM