The Prophet of Slow Food 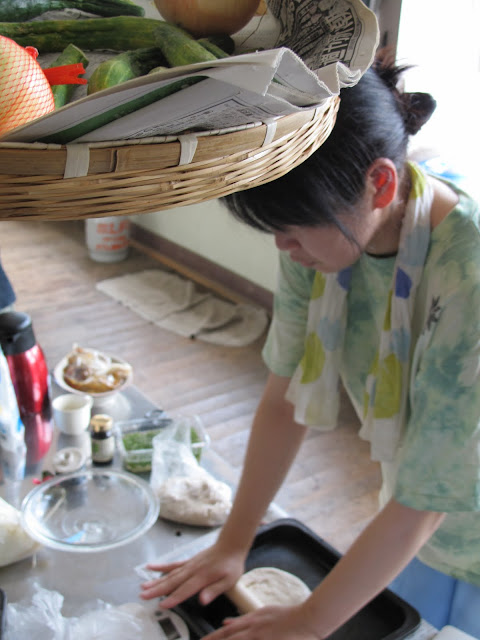 We journey by rickety bus to the mountain village of Onikoube, the "one of these is not like the other" part of Naruko.


Our destination is Yamagakko (“Mountain School”) Community Center. A former JHS built in the 1930s and closed due to low enrollment about 5 years ago, the building was resurrected as a community center shortly thereafter. The center has gained traction this year with the addition of a dozen staff members, hired with money from a government grant.


One of those new hires is Kimura-san. A former organic pizza chef, she has transformed a former science lab into the lair of a mad food scientist, still somewhat recognizable as a place where kids once dissected frogs, but now decorated with baskets of vegetables and bunches of drying herbs.
After urging us to sit down, she busies herself with preparing a meal for us. She is a ball of energy as she bustles from one end of the room to the other, pulling a near gourmet meal out of thin air. We’d look one way, and there’d be a bowl of pesto spaghetti, then another blur and suddenly there would be freshly baked bread in front of us.
Kimura-san's job is to interact with the locals in an ongoing exchange of ideas. She has no set job description, so she focuses on teaching cooking because that is her passion. In return, it is part of her task to learn things from the local people. Currently, she is learning to make rice balls wrapped in a bamboo leaf, a very ancient style. The rice inside stays good for about a week with no refrigeration or preservatives, as the bamboo leaf has anti-bacterial properties. The wrapper is biodegradable, so no waste. She proudly declares that, although they look old-fashioned, they are actually the food of the future.