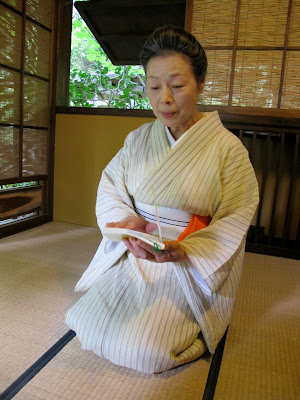 Our final morning in Naruko, ended in a very formal way:
We were able to be treated to tea ceremony. She is the only person in Higashi-Naruko offering tea ceremony. There is a traditional tea house, tucked into the woods near the famous Ohnuma mountainside bath.
One of her friends joined us for the ceremony, then excused herself. Ohnuma-san is well-versed in the art of sado, she was doing the movements more refined than anyone I have seen.
Once we had the tea, we talked for a bit. She showed us a book that she has in English on the art of tea ceremony. She does try to study it, but it is difficult to practice with no native speakers around. She was glad to be able to speak and listen… she likes to try to communicate in other languages. It was interesting to find an older woman, in a rural area, so interested in foreign culture (then again, she does run an inn!).
It is good to communicate heart-to-heart, in whatever mix of languages is needed.
She has been studying tea ceremony seriously for 20~25 years. While there are many clubs throughout Japan involved in tea ceremony, meaning that the art itself is not as endangered as kokeshi-making, she is still the last woman doing tea ceremony for guests in Higashi-Naruko, which is certainly a sign of decline in interest.
It is now the realm of older women, so we were glad to experience that, especially as our way to end our time in Naruko.
The tea ceremony completed, we got on the bus for our return to Sendai, our three week exploration of Naruko complete.