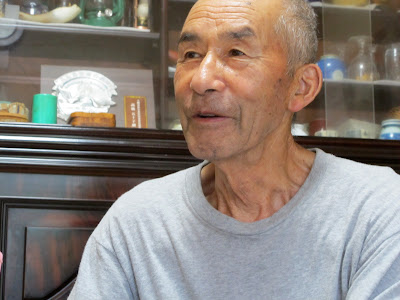 We drove up to Onikoube to speak to an elderly gentleman we had read about in the Naruko free paper. When we were asking around trying to find him, because the article had no contact details, Kimura-san from Yamagakko knew who we were talking about and gave us his number.

We went to his house, down a sidestreet all by itself, with a view of the mountains and fields.
He is 85 years old and has never lived anywhere else. He was conscripted into the army during WWII and survived the mass bombing of Sendai in the final days of the war. The train station was destroyed, most of the city was flattened, so it was a miracle that he survived the bombardment.
He was proud to show us a medal and certificate from the emperor last year recognizing his 45 years as a volunteer fire fighter.
We all assumed he had been a rice farmer, but he was a teacher, teaching ES and JHS because the schools were combined at that time. He taught mainly at the branch school (mentioned by Gotou-san) for kids journeying too far to travel every day. At that point, the snow was so heavy, the kids would sometimes have to sleep at the branch school.
He said he rarely went to Naruko back in the day. It was a 6 hour walk each way. Because of the shape of the hill, they called it Azuki Hill (Sweet Bean Hill).
We asked about myths:
His version of the origin of Onikoube was that several centuries ago, there was a rebel leader fighting against the lords of northern Honshu.  He fled from the fighting, was pursued, and when he was captured and beheaded, his head flew off and landed in Onikoube and bit into a stone there.
The original name was Onikaribe. The middle kanji looks more like “cut” or “slice”, so the name was probably closer to the “Place where the Oni was cut” rather than “Oni’s Head”. Both involve the head, so the name seems to come from a similar story.
Another story was that of Yamaneko, “The Mountain Cat” who was a famous bandit robbing many people in the area. After a spate of robberies, he was pursued by the villagers. He tried to escape by climbing up a waterfall. They shot him in the leg, but the bullet went clean through, so he was able to run away. Since it took so long to reload a musket, he was long gone by the time they reloaded. After another chase, he was cornered in a cave. He threw out a barrel, drawing their fire, and one the chambers were empty, he ran right past them. He continued to do this series of robberies and daring escapes, like Robin Hood without the socialist implications, but his daring seems to have impressed the locals.
Since hot springs reportedly have healing powers, but no one had told us any stories of miraculous cures, we asked if he had any stories for us. If anyone knew a story, it would be him. At first, he couldn’t think of one. But after a short pause, eh told us a personal story. When he was 8 years old, 77 years ago, he and a young friend were out in the woods, looking for a specific species of poisonous snake. The snake is put in a jar with sake and when the sake is drunk, is gives the person power.
They found a snake, but it bit him on his right thumb. They ran home, but he was so embarrassed, he didn’t want to tell his parents he had been bitten by a venomous snake. He did finally admit to the wound, hi s parents panicked, and dashed outside. A local holy man was passing by, who came inside and prayed over the boy. As he prayed, the fang emerged from the base of the boy’s thumb. The fang was extracted by prayer, but he was full of poison, His arm was swelling by the minute, to the elbow, and he says had the pattern of the snake on his arm.
His parents took him to the Radon Hot Spring and left him there for 5 days. Apparently, after 5 days of soaking in the waters, his arm got better. Whether that means the poison worked his course or he was healed by the onsen can’t be determined.
The man has 4 children, one of whom still lives in Onikoube and used to work for one of the ski resorts (now closed). Two live in Sendai, one in another prefecture. He didn’t seem concerned that his children all lived far away. When we asked if he ever considered living anywhere else, he said he had not. Considering the view of the mountain from his living room, we couldn’t blame him.
As he showed us to the door, he said if Onikoube didn’t have its mountains, it would have nothing.
August 10, 2010
Posted by Photoji Project at 1:28 PM