One Step at a Time – Takahashi Seiyu-san 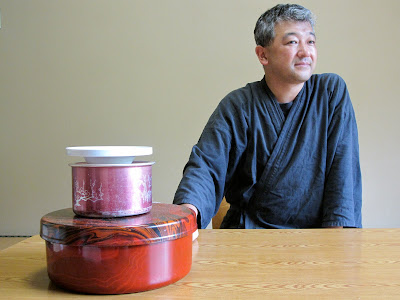 Although we had lived in his ryokan off-and-on for more than 2 weeks, we finally had a chance to sit down and talk with Seiyu-san, the owner of Kanshichiyu.
This is the 3rd time we sat down with him… he is the 7th generation owner of the property (which was opened in 1784!). It is one of the few in Higashi-Naruko to have existed when Date Masamune and his clan had their bath here. The lord placed a restriction on how much water the other baths could use, so this is one of the few onsen that was under those restrictions.
He is the 1st born son, so he always knew he would be taking over the business. He grew up in Naruko, but he lived away for awhile. He spent 4 years in Sendai for university, 2 years in Matsushima helping to manage a property there, and 1 year at a hotel in Kyoto. During the 3 years of working for other properties, he was specifically training himself to take over his family business: learning hospitality. When he was in Matsushima, he was actually the oldest of the young employees, having started post-university. But he was very motivated to work as hard as he could. For two reasons: first, he knew he was inheriting his family business and wanted to do well, and also he felt that , in those days, Japanese worked for the same company for life. So, knowing he was taking the job only to be there for a few years, he felt guilt and so while he couldn’t dedicate his life to the company, the least he could do was to give his all during the time he was there. Many of the things about hospitality in those days were geared more towards women, things like tea ceremony and flower arranging. Although traditionally practiced by both genders, by the time Seiyu-san was a young adult, they had moved firmly into the female realm and it definitely was only the women practicing (Seiyu-san being the exception).
He tried so hard that when he worked in Kyoto, the manager often felt that Seiyu-san was trying to show him up, and it resulted in some rivalry. Seiyu-san didn’t care about that, he just wanted to do a great job.
After his father passed away, he did move back to Naruko to take over the business.
It did used to be a much busier property, especially under his grandmother, who added the annex in 1958. Because there was no onsen within that building, it was never so popular, and in the last few years before it was shuttered, it was used to house the staff. 5 years ago it was shuttered entirely and is only opened for special events (like the annual AAF events – a gallery in 2009 and a childrens’ playground in 2010).
As far as cooperation with other inns, he did mention that there are more than one inn-owners association, but he wasn’t too keen on discussing what they do.
Although this is one of the most historic inns in Higashi-Naruko, it is still a bit big for the current amount of business. It has been nearly empty since we have been there.
August 15, 2010
Posted by Photoji Project at 9:00 AM