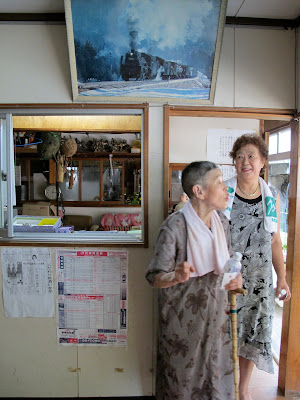 We returned to radon Hot Springs to talk to their elderly toji residents. On a previous visit, we were told that between 3 and 5 elderly people had moved to the onsen and were living there.
We showed up unannounced and asked if there was anyone we could talk to. We were told that many of them were out: although elderly, many of them still have their own cars and lead active lives. They did tell us that one long-term resident was there, but was hard of hearing. Another woman was available who, while there just under a year and younger, would make for an easier interview subject.
We went to the toji residence. We spoke to them both: Sasaki-san, the younger one is in her late-60s, early 70s (her son is 47). She has been there just under one year. She is on a yearly contract and is planning on renewing for another year.
The other woman we spoke to was Honda-san, who is 82 and has been there for 7 years.
Sasaki-san said she has always enjoyed onsen and has been going since she was quite small. She had been to Radon on previous occasions. A few years ago, she started suffering from severe arthritis, especially in her shoulders as well as persistence lower back pain. The hospital could do nothing for her.
She finally went to Farmer’s House, an onsen in the main part of Naruko, and stayed there for a bit before people in Naruko recommended that she try Radon. She transferred the previous October (10 months prior) and within a few weeks, she had regained mobility in her shoulders. Whereas before, she couldn’t raise her arms above her head, she now has full mobility and her back pain has cleared up.
She takes baths about 4 times per day and credits the onsen with her recovery. She is very at-home there, she does has a car, so she is also able to get out. Her children are scattered about, but they do come and visit. The grandkids are used to her living there.
Honda-san first visited Radon prior to WWII. Since she was born in 1929, she was there as a girl. She never had any children. She worked as a nurse. She retired when she was 65 and spent 10 years retired before moving to Radon at 75. Although hard of hearing, it is not due to sound loss. She has something like tinnitus, which makes it difficult for her to understand things over the buzzing. She was VERY talkative and kept running out of the room to fetch more and more Buddhist items relating to the mistress of the house (a “Great Buddha” is Honda-san’s imagination).
The mistress of the toji residence is rather incredible. She truly does believe in the Buddhist ideas of compassion and forgiveness. She estimates she has lost about $500,000 in her years running the property by forgiving people who couldn’t pay. (In one instance, they had a guest who wanted to visit his family, so she lent him one of the inn’s vehicles. He smashed up the car, the police called her, and when she found out about it, she didn’t charge him.
Honda-san had a sister that worked as a translator during WWII…
All in all, the place is very relaxed and everyone seems to know one another.
As we were leaving, we met another woman who lives in Yamagata, but who travels to Radon every day.
Many older people will go there for one week, as a mini-toji, will go home, realize they don’t see many people in their day-to-day life anymore, and then they come back because they like the companionship. It is like an unofficial nursing home or a clubhouse. The seniors there were shockingly ambulatory and talkative.
August 17, 2010
Posted by Photoji Project at 7:00 AM