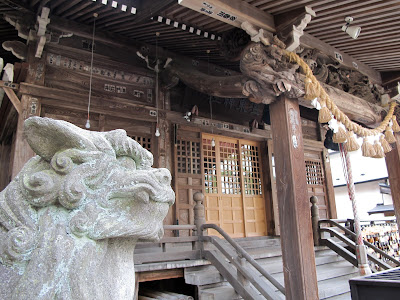 This shrine is dedicated to the God of Onsen. In Shinto, like in Hinduism, everything has its own spirit. Nearby Katanuma Lake is actually a volcanic crater. When it last exploded, a few hundred years ago, it ejected a large stone and the ground continued to shake for weeks after. At the same time, the tectonic activity split the ground, and the hot springs appeared. Both as a way of appeasing a seemingly angry god, and as a thank you for the miraculous hot springs, the local people built this shrine. The hot springs have flowed ever since and the volcano has not erupted again. 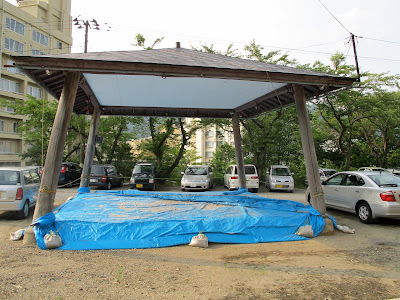 Near the shrine is a ring for amateur sumo bouts, now sandwiched among the Toyotas in a parking lot for one of the mega-hotels.
It seems incongruous to see an ancient shrine next to tour buses and large hotels. However, while the hotels look brand-new and corporate, they are actually among the oldest businesses in Naruko and the oldest of the three has been run by the same family for fourteen generations!
August 5, 2010
Posted by Photoji Project at 5:30 PM