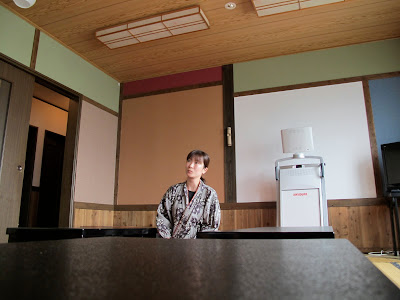 Exactly a week before, while walking to Kawatabi along the highway, we stumbled upon what looked to be a brand-new restaurant. Inside, it was spotlessly clean, very simple, only 6 tables, 2 people sleeping on the floor off to the side. The menu was also simple, just soba, curry rice, and tempura, but it smelled wonderful and the service was friendly, it was cheap and delicious.
As we were leaving, the young couple that was running the place encouraged us to take a dip in their day bath, which we declined, as it was very hot out. But at the end of the day, while passing by again, we decided to give it a go. We went into the ryokan behind the restaurant, which was also spotlessly clean and looked new, and their baths were fantastic. They have both an indoor and an outdoor bath, and while the outdoor bath is close to the highway, it is cleverly concealed and feels like its own world.
The question was, in an environment where the inns are closing left and right and where business is extremely difficult, who would open a new restaurant?
So, we returned and again had their lovely lunch. Then, we asked to speak to the two young people behind the counter. It turns out that the property was founded by the woman’s grandfather. He had a leg injury which prevented him from fighting in WWII. In an effort to prove he was a productive member of the community, he found (and dug!) a few of the hot springs in town, three of them in fact. One of them services a rest home for the elderly, one of them serves on of the public baths in town, and the third feeds the baths in the ryokan. He used a handpowered bore to dig in the vicinity of 500 meters below the property, it took him 3 months to dig the onsen. For a few decades, the property was a mushroom farm, but it became a ryokan 17 years ago.
The ryokan itself looks brand-new. The restaurant IS brand-new, opened only one month! The foods were previously served only to the guests of the ryokan, but they decided they needed a way to generate a steady revenue stream. They built the new restaurant building, moved the cooking operations out there, and offer the space as a place for weary drivers to rest, even if they don’t buy anything.
The young woman is part proprietor, along with her husband, who married into the family business. What happened was that in her parents’ generation, money became more and more tight, and an outside investor came in and took over ownership of the property, including putting down the money to build the restaurant. He allowed the young couple to stay on and manage the property, to keep it in the family. I asked if the new owner was a local man or a corporation and they said no, he was from Matsushima and owns the temple there. So, he is at least from Miyagi Prefecture, and his decision to let the young couple stay on as managers makes it seem that he is sensitive to keeping the business tied to the family.
The inn, built 17 years ago, was constructed when tourism was already in decline. They didn’t know that at the time, they thought maybe it had leveled off at a lower level. We asked how they took over the property… they were away from Naruko but came back to take over management of the property. They do have a 3-year-old son, not in school yet, but they said they were fine with him attending school there, as it is a good place to grow up.
The young woman showed us around the property. The great room downstairs is fantastic, multi-colored walls and a view of rice fields, not the highway. Despite its location on the highway, it feels isolated. There are only 8 rooms, in the traditional style. The rooms are all bright and cold, the AC blasting in all of them. All you could ask for in a traditional-style inn. The largest room was spacious. When we asked if they ever had toji guests, she said it’s not a toji inn. Occassionally, someone will stay for a week, maybe two, and opt not to get the meals, but that’s not really the purpose of the ryokan.
One notable feature was that cedar panels were added to the lower half of the walls. A simple touch, but subtly modern, and it made the rooms smell wonderful. It was an inexpensive way to freshen up the place and was done during the latest round of renovations.
We had coffee with the young woman, the 3rd generation manager of the property, and we asked her how things had changed. When she was younger, there were many more businesses, inns and otherwise. The ones that remain often have different owners now, which makes her sad. She is glad to be back, she is proud of the property (with good reason).
As a child, she roamed the fields, but at 12 she had to help run the ryokan (she is therefore 29 years old). She is deeply invested in seeing the property succeed, but business has not been good. It was heartbreaking to see the amount of traffic whizzing by on the highway between Furukawa and Yamagata and to see the restaurant and baths empty.
We wished them the best… there is not much more they can do: the inn is a good size, good service, great food, great baths (indoor and out), easily accessible… the only thing missing was customers.
August 9, 2010
Posted by Photoji Project at 3:00 PM