If even the pachinko parlor is out of business...? 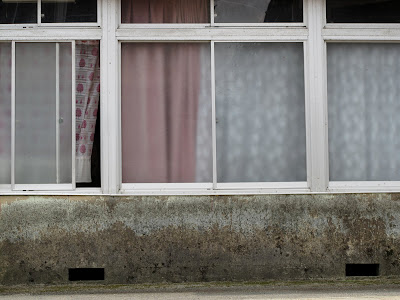 Without a translator today, Beth and I decide to walk from Higashi-Naruko to the next town over, Kawatabi.

Higashi-Naruko, where we are staying, is the more traditional part of town and not to be confused with Naruko proper, which is where all the 8-story hotels are located.  Higashi-Naruko hit its peak in the mid-1950s. Kanshichiyu, where we are staying, was popular enough back then to add its now-shuttered an annex in 1958. Most of the buildings in Higashi-Naruko were built or enlarged in the '50s, '60s, or '70s, but at this point, the neighborhood is essentially lifeless.
August is never a popular season for onsen visits, but we see almost no one on the streets. No customers…

We wander into a kokeshi factory at the end of the street and browse inside for 30 minutes, but no one comes to greet us. Everything is covered in dust, and many of the items for sale are faded and cracking, as if the last tourist to even pick up an item was sometime during the 1980s. Their most notable souvenir is a set of 6 erotic glasses: nestled on a shelf with wooden childrens’ toys. All feature white, Western women with big '80s hair, bad '80s lingerie… that disappear when liquid is poured inside. The glasses are so old that the plastic boxes containing them have yellowed and cracked and the price tags have faded entirely to white. 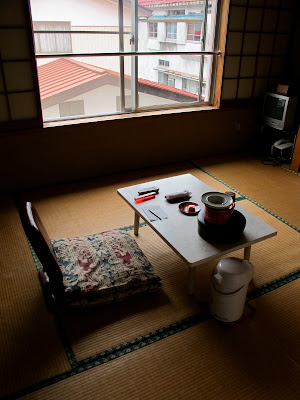 Other than Ryokan Ohnuma, which is always a hive of activity, and Kanshichiyu, it is difficult to tell what shops are even open. There’s a bakery that has about 10 things for sale and a grocery store with a few people inside, but we pass a ramen shop still sporting a poster from Asahi Art Festival 2005. Some buildings have windows open, so people are apparently at home, but no economic activity at all.  For all intents and purposes, it looks like a ghost town.

With this project, if anyone from the outside were to hop off the bus and take a peek, they would assume the town is dead, beyond dead, but I have met people doing interesting things… there are hints of life. As we look at these particular buildings, it is clear the town hit the peak of its popularity 40 years ago, and while it may never reach those heady heights again, hopefully all is not lost. Perhaps some of the empty buildings could be razed and planted as formal gardens and let the town go back to being less dense and more scenic. But who knows who owns all of those buildings, and for some, people are still living upstairs even if the ground floor is empty, so it’s a complex problem. 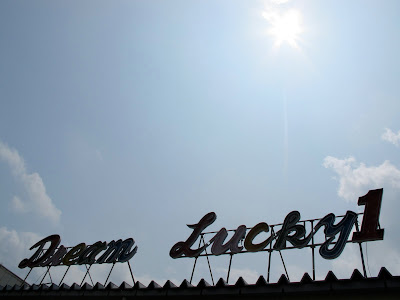 On our walk, we stumble upon “DL” – the Dream Lucky Pachinko Parlor.

It has been out of business for a long time. Pachinko, a strange sort of vertical pinball machine, is the national gambling obsession of Japan. Very little strategy is involved… you feed little ball-bearing-size balls into the machine, you twist the level just so, and you try to shoot the balls into holes, winning more balls. Although it involves little strategy and even less thinking, pachinko parlors are typically crammed with row upon row of glassy-eyed players.


Considering that pachinko is THE major hobby of most Japanese over the age of about 40, the fact that this town caters mostly to elderly people and they could not keep a pachinko parlor open is a sign of serious problems. That would be like Las Vegas only having one casino and having it close due to lack of interest.
August 2, 2010
Posted by Photoji Project at 8:00 PM