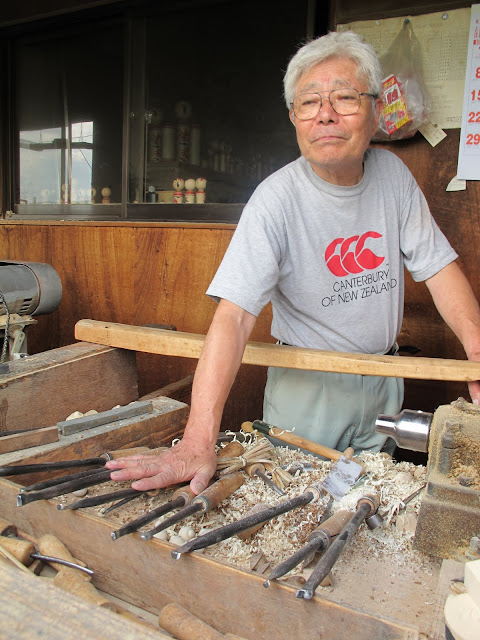 With no scheduled interview this morning, we set off to talk to the son of the milk-powered rice farmer whom we had met the week before.
As we walk by the side of a busy highway, we pass an elderly man, standing in what looks like a drive-thru window, carving kokeshi. As we watch, he carves a tiny wooden doll with a head the size of a marble. He is so engrossed in his work that he doesn’t even notice us until the head is entirely finished. As he pulls the newly created figure off the spindle, he apologizes because he has been making a doll in the style of a different part of Japan.

To make up for it, and happy to have an audience, he proceeds to carve a traditional medium-sized Naruko-style kokeshi. The head was already mostly carved, so he quickly sanded it down. He then carves the body and joins the two pieces in less than ten minutes. The dexterity and grace of his elderly hands is a marvel. I don't think I could draw a kokeshi as quickly and as effortlessly as he was able to create a three-dimensional figure.
Terayuki-san is 70 years old and has been making kokeshi for 55 years. Not wanting to be a government official like his father, or willing to continue school past high school, he apprenticed to a master craftsman when he was only fifteen. Not only did he learn to carve and paint kokeshi, he learned to make his own tools, as a master kokeshi-maker is expected to create his own.

From his little window, where he has sat for half a century, he has watched as the flow of people into Naruko has crested and ebbed. But he doesn't seem to mind the dwindling crowds, because after fifty-five years of kokeshi-making, he still enjoys creating each and every doll.
August 7, 2010
Posted by Photoji Project at 5:00 PM