We had our final formal interview, with Ohnuma-san…  it was a fitting end, as it was a conversation with Ohnuma-san back in March that sparked my interest in Naruko and toji in the first place. 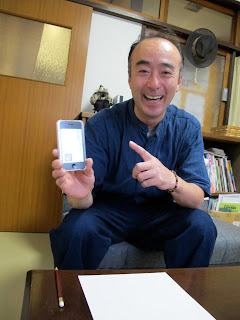 He was busy, as usual…
Toji is not about vacation, it is a holistic approach to health and a way to heal your body. So, he makes a distinction between the hotels in Naruko that only get day visitors and the toji residences of Higashi-Naruko.
He highlights the importance of the whole community in supporting toji culture: as toji residents cook for themselves, you need to have grocery stores nearby. The barber down the street, whose shop is always empty these days, during the boom years, fully 70% of his customers were toji residents.
The different inns are connected… because all of the spring sources are different, leading to waters with different mineral compositions, it is important for people to have choices. Some places have baths high in iron, others are high in sulfur: visitors should be able to choose a different place to stay depending on their bodily needs. The Ohnuma source is high in Sodium Bicarbonate, which is supposed to be good to balance pH and to eliminate free radicals.
As far as competition between the inns, or working together, he thinks that they are all branches of one large “Naruko inn”: none of them are that big, so their capacity is each very limited. It’s good to have the choices and to feel at home wherever they go.
He has been involved with AAF since 2005. He thinks it is a way to add commentary from people outside the community. He thinks it has attracted a trickle of new guests, but certainly not a flood.
We asked about things like yoga or acupuncture/acupressure as other ways of attracting people interested in healing. As far as the arts, Oba-san had mentioned a potential music academy, where people could come out to Naruko and take music lessons. He said a group on a meditation tour of Japan will be staying there soon.
He is not always thinking of ways to change the inn itself, that remains traditional and not much changed in a few generations, but of ways to offer a wider menu of entertainment options.
He has been online since 1999, he has been involved in the art projects. He doesn’t see why young people will move back in the current state. He is happy with the direction of things at his inn, but he still wants to introduce toji to a new generation.
August 18, 2010
Posted by Photoji Project at 6:00 AM