The Force of Nature - Masako-san 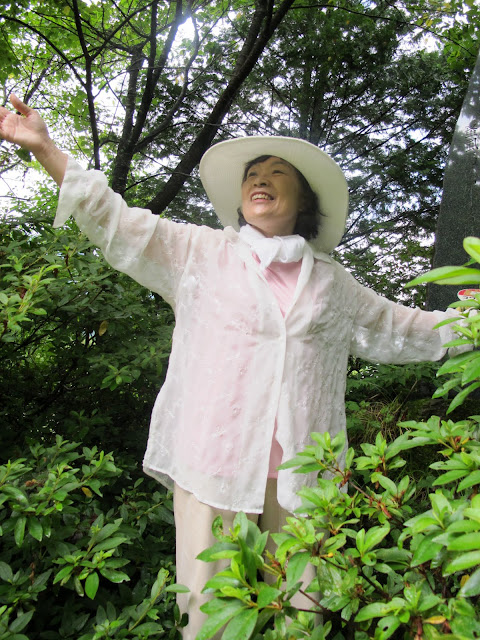 
After being bundled back into the car, she took us to a second spot, part of the path walked by Basho himself. There is a parking lot there, and it is across from the frequently visited Naruko Gorge Bridge, but the entrance is behind a restroom building and not well-marked at all. As she took us down a flight of washed out stairs, she was frustrated that the government doesn’t better maintain a path walked by Basho.
We walked into a hidden wonderland, overgrown and lush, with a stream running through it, all to ourselves. A few years ago in the 1980s, the government did try to play up the fact that Basho had passed through the town, but other than that one PR campaign, that was the only mention of this spot as important to Basho. She thinks PR efforts on behalf of Naruko are lacking.
As we followed in the footsteps of Basho 300 years prior, we were all impressed with Masako-san’s deep knowledge of the local flora, both names and uses, but she spoke in a high level of Japanese. Her love of poetry extends from composing haiku to being able to speak of the world in a poetic way, with a vocabulary not often encountered in a university graduate, but especially beautiful coming from the mouth of the wife of a kokeshi-maker we met on the side of the highway, in an often overlooked shop.
As we walked, she said it was powerful to show us this place, both for us and for herself, She feels she absorbs the energy of nature. She took us across the road to the famous Naruko Gorge Bridge, famous from many postcards.
She is 65, her husband is 70. Takahashi-san, whose father was a government official, had to apprentice to someone outside the family. He apprenticed with Masako-san’s uncle. In those days, you had to train for 5 years or 10 years, and lived with your master. At 15, Takahashi-san moved into Masako-san’s household, so they knew each other long before they were even married. Making sweet puppy eyes to each other over the rice bowl. It was like they were married a long time before they were even married. They have a very loving relationship and rather unique. Earlier, Takahashi-san had brought us all iced tea, and later more ice to keep it cool. It was the first time in Japan we had ever seen a man serve drinks to his wife and guests. He was very quiet, he just handed it over. Just a simple, loving gesture, the thing you see in a couple together for 50 years.
In every aspect of their being, they seem content with where they are. Takahashi-san says he enjoys nothing more than making his kokeshi. 55 years into it, he still takes pride in his work. Although Masako-san’s children may be far away and the shop isn’t doing as well as it was, she loves her husband and loves haiku and being  a poet. So these two artistic souls, hidden away in a shop hidden right in the open, it was such a beautiful pair to meet and we were so glad to have met them. We never would have had the chance except that we were on foot and decided to stop and watch Takahashi-san while he was working. We were really glad to have stopped and were so touched by the generosity of Masako-san to take us around all day.
August 7, 2010
Posted by Photoji Project at 4:50 PM