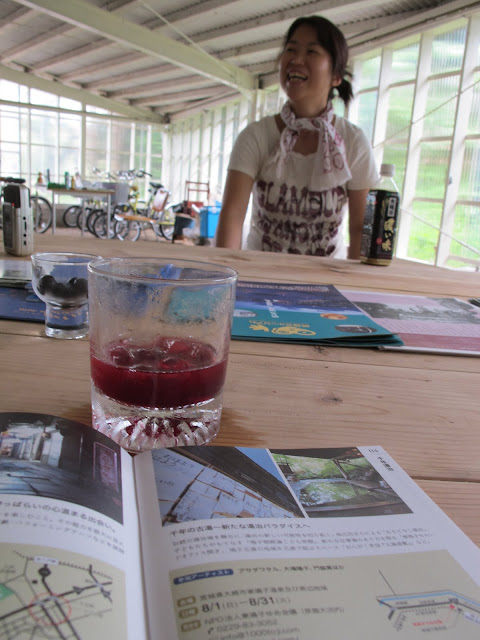 We start the day talking with Oba-san, the wife of the owner of Ryokan Ohnuma and a contemporary classical composer. She has written music to be played while sake ferments as well as a symphony for frogs, which in my mind is more fun than the kind of classical music played for old ladies in pearls in halls that smell of Chanel No. 5.
We visit her in a former shed, almost under the JR tracks. The room is mostly empty. Other than the dirt floor, the walls have been painted an immaculate white. A large very minimalist shelf stands behind a desk, the shelf covered in spotless glasses and plates. A projector is playing looped scenes of Naruko and Oba-san's music tinkles in the background. The room is an impromptu café, a free space, to sit around with your thoughts while drinking fresh blueberry juice.

There she sits, surrounded by stark white walls and a dirt floor, like an artistic monk. The room is her contribution to the 5th edition of the Asahi Arts Fest in Naruko. It turns out that SIX years ago, Oba-san was involved in a different AAF project. While at that year's kick-off party, she met her future husband promoting his 2006 project. While therefore a meaningful event for the newly-married couple, we asked her why they keep at it, since attendance has not increased in the five years they have been working on the AAF events in Naruko together.


During her life in Tokyo, Oba-san was frustrated that whenever she mounted a performance of one of her pieces, it was always the same audience. It felt stifling and far from the reasons she started to compose. When she mounted her first performance in Naruko, the audience was no bigger than in Tokyo, but for them it was perhaps the first performance they had ever seen. The music was something special for them, and consequently, the music again felt special to Oba-san as well.