We step off the bus from Sendai and stand in the middle of the street in Higashi Naruko, the historical heart of toji culture in the area and our base for the next three weeks.

Everything is still and quiet, except for the cicadas, who are celebrating the middle of summer with loud buzzing.

Either that, or they are just complaining that it is hot. Because it is hot. Really hot. The hottest summer in recent memory.

Who takes a vacation in a hot spring town in the middle of the summer?

The answer seems to be "only us" because other than the barber in the shop next to our ryokan peering hopefully through his curtains for customers who are not coming, and the ever-present buzzing of the cicadas, not a creature is stirring...

We check into our ryokan and try to decide on a plan of action. We have no interviews scheduled, we don't really know anyone, and we really don't even know where to start. It's not like you can take an entire town out to lunch...

But while that may be a metaphysical impossibility, we decide that lunch sounds like a wonderful idea. We pay a visit to the lovely onigiri shop that functions as a retail outlet for the rice grown by the Naruko No Kome project that Taka and I had planted with a few months earlier. 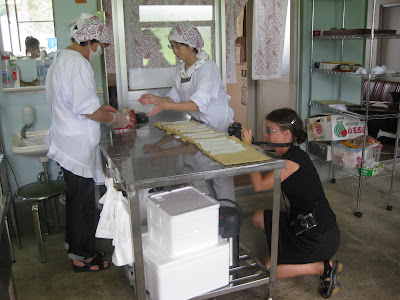 After a tasty lunch of rice balls, we talk to the charming manager of the shop. I am interested in interviewing the farmer whose fields I had planted in. Other than being a source of positive change in the community, he had also serenaded the rice planters with a beautiful song on the day of the planting which I want to record.

We squint at photos on the wall documenting the rice planting, trying to determine which farmer is the one I want to interview. After much squinting, we find the man in question. The manager gives us his contact information, and just like that, we have another interview scheduled.

The lone other customer in the shop overhears us discussing our project. She offers to give us a lift to a scenic road near her house, leading to a tree that the manager of the onigiri shop had described as her favorite place in Naruko.

During the three-minute drive, the woman tells us that she was born in Naruko, but had moved to Tokyo, like so many other people from rural Japan. However, the charms of big city life were lost on her, and she had recently returned. Even though her employment prospects were slim, she had found temp work in an office, and is glad to be away from the big city.

She tells us she can drive further, but that would be spoiling the majesty, and it would be better to approach on foot. So, we pile out of her car, thank her, and she drives away. We don't even know her name.

But, as we round the bend, and spot the lone tree standing in the rice field in the shadow of a mountain, we know her suggestion is a good one: it is majestic to approach on foot.

Makie and I are also surprised to see how familiar the place looks: it was under the same tree that we had listened to the frog symphony only a few weeks before.

We walk slowly down the road, surrounded by more shades of green than even the Crayola company produces.

Curving around another bend, we stop at an impossibly old house. Surrounded by a fence and with army of high grass in the yard, it looks like it hadn't been occupied in some time.

A pickup truck approaches and out clambers an old farmer who looks to be about as old as the house. He glares at us accusingly, then speaks rapidly to Makie.

"He wants to know if we have a problem with his grandmother's house..."

Although the rice farmer is about 164 years old and a full head shorter than me, I have a feeling he could beat me up if he felt like it. I don't want him to think we are making fun of his grandmother.

"Tell him we find it interesting..."

After Makie assures the man that we are merely curious tourists, not teenage vandals, he begins to talk. And talk. We are all flagging in the afternoon heat, but the man doesn't seem to notice. I suppose that's what happens when you spend decades working in the sun...

It turns out the house is over 200 years old, and was last occupied by his grandmother. He now uses it for storage. He gestures across his fields and across the highway to a huge, red-roofed house. "That is where I live now."

He points to a greenhouse elsewhere in the distance.

"...and that is where I keep my equipment. Over ten million yen worth..."

His face finally cracks into a smile.

He hops back into his truck and speeds off. 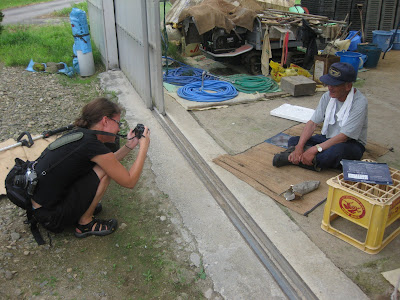 As we continue down the road, we pass the greenhouse, and the old rice farmer is sitting in the entrance to his sanctuary, cleaning some tools. This time, he smiles at us as we approach.

He ushers us inside his treasure trove. As he said, it is full of equipment, all of it immaculately clean ("Isn't this farm equipment?" I think each time we pass another meticulously maintained piece of machinery). He proudly describes to us what each. and. every. one. is used for.

The inside of the greenhouse is about 45 degrees Celsius, but the farmer doesn't seem to notice.

"Is he solar-powered?" I wonder.

No, milk-powered, as it turns out.

The farmer proudly declares his diet and daily regimen. No alcohol. Lots of natto, rice, and milk. LOTS of milk. 400cc every day. I have no idea how much that is, but he cackles as he says it. He then proffers an arm, poking at his rope-like veins proudly.

"The nurses never have trouble giving me an injection!" he boasts. "Not that I need them... I never go to the hospital. I never get sick!"

As we leave, the farmer mentions his son who, at 52, had decided to quit his job as a teacher in Sendai three years previously to come back and help on the farm. Our collective ears perk up. Someone who had decided to leave the city for the farm? We are intrigued, and ask if we can talk to his son. The farmer seems shocked that we would want to talk to his son, but admits that we can probably see him the following weekend if we really want to. We note his contact details and leave the greenhouse, all of us worried that we have sweated out a few kilos of water.

But rather than wanting water, all of us are craving milk....