During our stay in Naruko, we will be staying at both Ryokan Ohnuma and Ryokan Kanshichiyu. For the past five years, both inns have been participating in the Asahi Art Festival, an annual program wherein Asahi Beer gives about 20 community arts groups throughout Japan a small grant and promotion for their efforts. The push of the festival is to get art out of the galleries and out to everyday people, a mission we can truly get behind.

This year, the Naruko AAF project is called 1000 Toji and it is an attempt to recognize the one thousand years that toji culture has existed in Japan and  is an effort to help it exist for another thousand. Again, a mission that dovetails with what we are trying to accomplish with the "Vanishing Point" project.

In the boom days of the 1950s, Kanshichiyu was busy enough to open an annex building. But, with the number of guests falling year after year, the annex was shuttered five years ago. Last year, new life was briefly breathed into the building during the AAF event when it was used as an art gallery. Today, the annex is home to a 1000 Toji event called "Childrens' Ryokan." 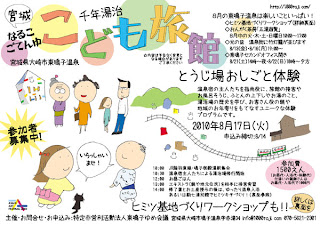 This year, the whole building has been transformed into a playground for kids. Inside are onsen baths full of packing peanuts, a Collector's Room with both a stuffed cobra AND a spaceship made of bottles, a room with a racetrack for battery-powered cars, a small library... on and on.

It looks like lots of fun, but only four kids are running around. They seem to be enjoying themselves, and it is only the first day of the project, but it doesn't look like the next one thousand years of toji culture. It looks more like a daycare center gone to seed.

But it is heartwarming to hear the laughter of children echoing in the normally empty halls. Two days into our stay in Naruko, and we are already realizing that the median age of the people we are seeing on the streets seems to be about 70.

Where are all the young people?